AGM Minutes can be seen at the bottom of this page.

If there is a matter you would like the committee to discuss, pop into the Shop and talk to Heather or Wilna.

Minutes of the Meeting of TVS 29th January 2020

Minutes of the Meeting of 27th November: These were approved and signed, after correction of the spelling of ‘Youings’

Matters Arising: A J-R reported that our existing privacy policy covers us for the inclusion of photographs in the parish magazine so that there was no need for her to design a specific consent form.

Finance Report: Profit for this month is £1628, the savings account contains £21,290 and current account £10,543. RP cautioned that though this looks healthy, the 51p increase in basic wage which will be effective from April will have an impact in the new financial year. While we await final invoices the overall picture for the year is unclear but RP expects that we will break even.

Managers Report: Rachael Whitbread has plans to contact the holiday lets in the area and propose a link to our website which would be mutually beneficial. It was agreed that alongside this initiative we should print more of the ‘Welcome’ vouchers to distribute to the lets.

There are trade shows on 5th, 13th and 26th February, and extra cover will be needed for the shop in HK and WH’s absence. Committee members were invited to go with them; MM is going on 5th February and A J-R also expressed an interest.

Most people have renewed their 100 Club membership but we are down 4 on last year. HK had discussed starting ‘Open the Box’ again with the previous organiser, and they had decided to wait until Easter.

The shop computers currently run on an old version of Windows which is no longer supported by Microsoft. HK sought permission to look into the cost of an upgrade, and to include in this the secretary laptop.

The damp wall in the office which resulted from a leak upstairs needs urgent attention. HK is concerned this might attract attention from Environmental Health should they visit. A J-R agreed to raise the matter at next week’s parish council meeting.

Ideas for Sponsorship/Fundraising: MM suggested that since the Breakfast Club had now closed, we offer a Sunday breakfast once a month; she and PP volunteered to cook this. It was agreed that this should start on 8th March but thereafter run on 1st Sunday of the month, eat in only, from 10-11.30.

MM also suggested that we have another calendar, this one featuring the various social groups in the village. A J-R offered to list them and start to contact to see the level of interest.

CG had suggested a curry night once a month but as she was not there to provide details of what she had in mind discussion of the proposal was limited, though there was some concern about the impact on neighbouring houses.

The Knit and Natter and games afternoon on Wednesdays had started, and there was discussion about what games should be bought. HK offered to purchase.

Repair to the Front of the Shop: This has not progressed. Another builder has been to make an estimate but not submitted a quote. SB is having some work done and offered to speak to her builder.

Correspondence: SM reported that she had emailed John Higgs re plans from the parish council to activate their declaration of a climate emergency, and that she had heard back from him but that nothing definite had yet been formulated.

AOB: SB raised a concern about the amount of water the toilet uses to flush. There was some discussion of getting a ‘hippo’ bag to reduce this but WH pointed out that despite the amount of water used it does not always flush effectively and that that might get worse if we had a hippo. SB offered to arrange a quote for a new cistern.

SB was also concerned about an uneven patch of concrete to the left hand side of the shop; there was some discussion about where exactly she meant and whether it was an old dip that had deteriorated or something new. As it was too dark to check this was left to be looked at in the morning.

MM has ordered some plug plants to sell, which if very small may need to be grown on, in which case she will need any spare pots people may have.

Following the meeting, SB found information about a grant available from ‘Dorset for You’ for replacement of the toilet. A J-R contacted the committee by email and sought approval to apply for this.

The shop is run by the Thorncombe Village Shop Association (TVSA).

The chairman is:
Anne Johnson-Rooks

The manager of the shop is:
Heather King

The assistant Manager is:
Wilna Hawker 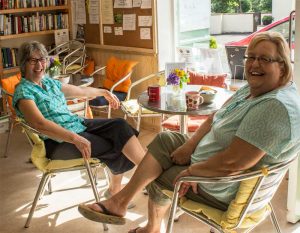 The Chair, Ann Johnson-Rooks, opened the meeting at 7.30 and welcomed everyone.

Minutes of the Annual General Meeting of 27th July 2017

These were agreed as correct and signed.

Presentation of Accounts and Treasurer’s Report

Richard Peacock reported that turnover was up £240 on the previous year, and gross profit had increased from £46,460 to £49,114, with running costs down from £48,331 to £45,875. These figures were encouraging, but he emphasised the need for continued support from the community if this trend was to continue until 2029 when the loan will be repaid.

He then asked for questions from the floor. Roger Greaves spoke at length, giving his own forecast and the consequent necessity of rescheduling the loan to avoid defaulting and burdening the parish with an increase on the precept. He then left the meeting.

Richard asked if there were actual questions, and since there were none, proposed the accounts be accepted. This was seconded and approved.

Richard briefly explained that this was usual practice with the accounts, and the disapplication was proposed, seconded and approved.

This was proposed, seconded, and approved.

Anne Johnson-Rooks thanked all the volunteers and everyone who supported the shop in different ways; there is an ongoing need for more volunteers and she encouraged everyone to use the shop and to feedback comments. She informed the meeting of the development of the café area, thanked those who had made donations and explained that there were further grant applications in process. The aims, objectives and vision of the shop are now available for everyone to see on the website, and she concluded with her conviction that the shop would survive and that this would be achieved.

John Barnes had resigned from the committee, but other existing members had agreed to stand again. Two new shareholders had come forward, Ian Harrison and Sandra Ballisat: they introduced themselves and along with Richard Peacock, Sarah Mackinnon, Mary Morris, Pauline Holt, Melanie Pierce-Butler and Anne Rooks-Johnson were elected to the committee for the coming year.

Paul Roberts thanked the committee for their work, but also suggested that it might be useful to produce spreadsheets with projected profit/loss and measures to address financial threat; he thought this could be helpful in counteracting the claims of those who continued to be doubtful about the shop’s viability. Mike Carr offered to make the spreadsheets he had used available to the new committee.

Rose Richards noted that it was the shop’s 10th anniversary next year and looked forward to the celebrations.

Richard Arnold pointed out that in the worst case scenario of the shop failing, the addition to the precept would amount to 59 pence per property per week.

Heather King thanked all shareholders and account holders and wanted everyone to realise what an asset to the community the shop is.

There being no other business, the meeting closed at 8.10 pm